What others say about New Tricks for Old Dogs 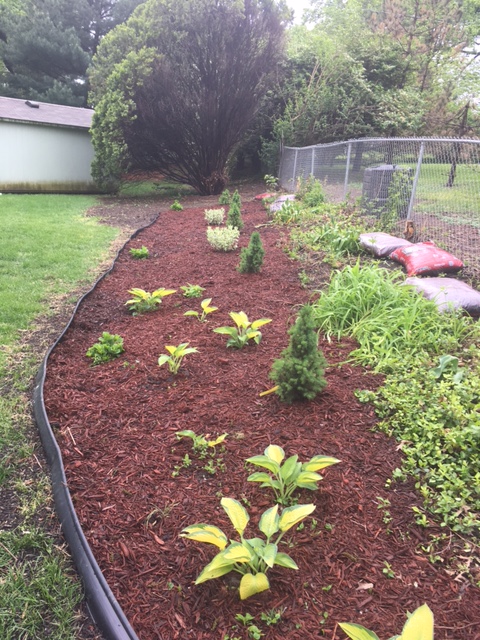 My late husband had a quaint, but critical saying that he occasionally aimed in my direction. When he saw me tackling some project and only doing a half-a**ed job at it, he would look at it and say, “That looks like Buffy did it.”

Well, the ever-incompetent Buffy is alive and well in me and she just spent the last several days sweating through a major landscaping project. The results are less than satisfying.

The precursor to all my incompetence began with an innocent conversation with a neighbor at a holiday gathering. She informed me that those pretty little plants in my back yard—the ones I fought to tame every spring and fall with their enormous overgrowth—was not an innocent haven for birds. Instead, it was an invasive monster that would kill everything in its path. In addition, it would be responsible for the major sin of any city dweller—encroachment.

Invasion of the monster plants

Encroachment may sound like legalistic jargon, which it is. Replace the word with “invasion” and you get a more concrete idea. My Japanese honeysuckle made me a bad neighbor by reaching its ever-expanding tentacles into my neighbors’ yards. It wound itself around and through my chain link fence and began to choke the life out of a massive evergreen in the back yard.

By now, someone surely must have formed a Society for the Prevention of Japanese Honeysuckle Encroachment. I could be a charter member. I have done my duty to God and my neighbors in freeing my own little corner of this beautiful but obnoxious greenery. And Buffy rode into the vacuum created by the honeysuckle eradication efforts.

Wayne, my strong partner in the eradication efforts, (the one with the truck and trailer to haul off the offensive plants), made the mistake of taking me to Home Depot early this spring. There we found the cutest little evergreens for only $4.97 apiece. They came home with me and he obligingly planted them. But they looked lonely where the honeysuckle once roamed, so I made a solo trip to Lowe’s and came home with two pots of ornamental grasses and two pots of I-Forget-Whats. All of them promise to eventually fill in some bare spots.

Fill in the space, said the voice of Buffy

But every day that I looked out the window to the large bare area with eight dots of new plants, a voice cried out,“get busy.” So Last Saturday we returned to Home Depot for 33 bags of mulch.

I had already picked up some black plastic edging and landscape cloth in the action aisle of a discount grocery store. A plan formed in my Buffy brain and it came to fruition only after poor Wayne hauled every single bag of heavy mulch on his shoulders, through the garage, and to the furthest reaches of my back yard. He left me with tips on how best to get the plastic edging lodged into the ground to hold the mulch and the landscape cloth underneath.

For the next four evenings I sweated, cussed, lost a utility knife under a pile of mulch and broke a fingernail way past the quick.

I tried to get a stubborn piece of thick black plastic to unroll and stay flat by stepping on it at regular intervals. All that accomplished was to put permanent kinks in it. I then did my best to get that black plastic to wedge itself into the ground and stay put, using a tiling spade and a monstrous tool that we called our snake killer (picture a heavy, flat-bladed thingamajig). It felt like digging to China, but when the edging was put in place, it threatened to pop right back out if I even looked at it sideways.

That’s when I wished I had called on a professional landscaper.

Good enough for who it’s for

Through the sweat that blurred my vision, I did the best that Buffy could manage, all the while guiltily recalling my mother’s words decades ago, “If it’s worth doing, it’s worth doing right.” But I have preferred the theory always spouted by my ex-mother-in-law, “On a galloping horse, you’ll never tell the difference.” For 40 years I’ve hurried to finish major projects and also unconsciously adopted Wayne’s wisdom, “It’s good enough for who it’s for,” and the ancillary, “Close enough for government work.”

The landscaping project is almost finished . . . only eight bags of mulch to spread. While I struggle to keep the last vestiges of honeysuckle from reappearing by zapping new shoots with brush killer, I have stopped worrying about the kinks in the edging. It doesn’t even bother me when I see the squirrels digging up and dislodging the landscape cloth. Instead, I throw my eyes out of focus in the same manner I use to view myself in the mirror to avoid seeing old age bulges and wrinkles. And what I see is order where chaos once reigned. What I see is, at least superficially, a manicured planting and a new definition to a yard that once grew wild and untamed.

I try not to think about the leisure I could have enjoyed or the book I could have returned to instead of wearing mulch on my sweat-stained arms. Instead I recall a poem by Barbara J. Burrow that a friend gifted me with years ago:

who loves life and lives it to the fullest;

who has discovered and shared

the strengths and talents that are uniquely her own;

who puts her best into each task

and leaves each situation better than she found it;

who seeks and finds that which is beautiful

whose heart is full of love and warm with compassion;

who has found joy in living and peace within herself.

While the wisdom of the poem doesn’t address our inner critics, it certainly explains why we try to make places of beauty in our outward and internal landscapes. One day soon I will fully realize that perfection is not my department, or part of my job description, and that my Buffy best is as good as it gets.